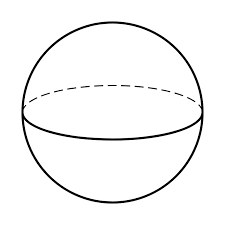 A sphere is a round-shaped three-dimensional figure that is defined in three axes, namely, x-axis, y-axis, and z-axis. Through this article one can learn the meaning, elements, properties, surface area formula, and volume of sphere formula.

What is meant by Sphere?

In mathematics, a sphere is a three-dimensional geometrical round-shaped figure. In other words, the sphere can be defined as the set of points connected with one common point at equal distances. Some real-life examples of spheres include football, a soap bubble, basketball, world globe, planets, marbles, and many others.

What are the Elements of a Sphere?

Below-given are some major elements of a sphere:

What are the Properties of a Sphere?

There are some basic properties of the sphere and these properties are also known as the attributes of a sphere.

What are the Formulas of a Sphere?

The surface area of a sphere:

In case if the diameter of a sphere is given instead of the radius, then the formula to calculate the surface area of a sphere is:

The volume of a sphere:

Cuemath is an educational platform providing live online classes explaining the concepts of different geometrical figures such as the surface area of a sphere, the volume of cone, and many more. Teachers here are well qualified and trained in teaching the students using different methodologies.