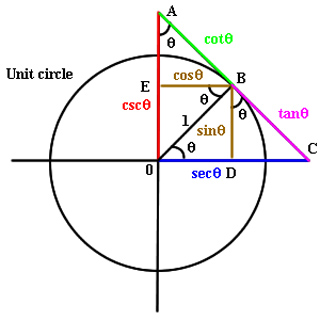 Let us know about various Trigonometric Functions and their Inverse Properties.

The ratio of the opposite side length to the hypotenuse is known as the sine function of an angle. As illustrated in the diagram, the value of sin is:

The ratio of the neighboring side’s length to the hypotenuse’s length is called as cosine function of an angle. The above diagram can be used to calculate the cos function.

The tangent function is the ratio of the lengths of the opposing and adjacent sides. It’s worth mentioning that tan can be written as the ratio of sine and cosine. As seen in the picture above, the tan function will be as follows.

Angles or real numbers whose sine is x, cosine is x, and tangent is x are denoted by sin-1x, cos-1x, tan-1x, and so on, provided that the answers supplied are numerically the smallest available. These are also known as arcsin x, arccosine x, and so on.

If two angles with the same numerical value, one positive and the other negative, the positive angle should be chosen.

Many various angles correspond to the same result of sin() in the sine function. As an example,

For any kk integer, We will restrict our domain before calculating the inverse sine function to avoid the problem of numerous values mapping to the same angle.