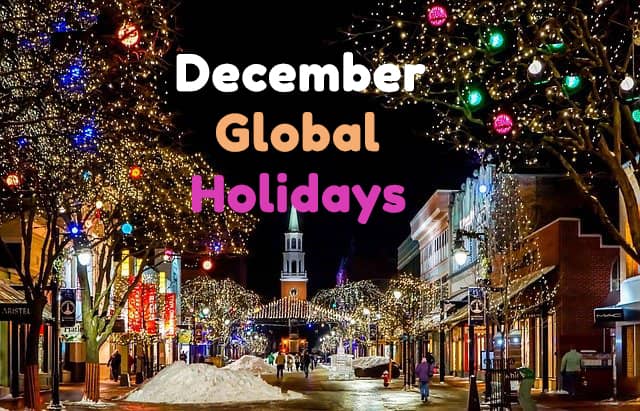 Few months present as many multicultural celebrations as December. From Christmas to Omisoka, the last month of the year is a “world of holidays.” Let’s take a look at some of December’s holidays around the world.

In the Christian faith, Christmas is the historical celebration of the birth of Jesus Christ. Whether celebrated for this religious reason or solely as a cultural celebration, Christmas traditions vary around the world. While Americans celebrate with Christmas trees, visits from Santa Claus, and dreams of snowy landscapes, Christmas falls during Australia’s summer, where it is popular to go camping or to the beach over the holiday. Some Australians decorate a “Christmas Bush,” a native Australian tree with small green leaves and flowers that turn red during the summer.

In England, Christmas traditions are similar to those in the United States, but instead of leaving milk and cookies for Santa Claus, children leave mince pies and brandy for Father Christmas. In Iceland, capital city Reykjavik turns into a winter wonderland with its Christmas market and for the children, there is not one but thirteen Santas, known as Yule Lads. One arrives each night in the thirteen days before Christmas, leaving small gifts in shoes left in window sills. Read more about how Christmas is celebrated around the world here.

Hanukkah, or Chanukah, is an eight-day Jewish celebration that commemorates the re-dedication of the Second Temple in Jerusalem following the Maccabean Revolt. Those who took part in the re-dedication witnessed what they believed to be a miracle. Even though there was only enough untainted oil to keep the menorah’s candles burning for a single day, the flames continued to burn for eight nights.

Also known as the Festival of Lights, Hanukkah begins on the 25th of Kislev on the Hebrew calendar. Celebrations revolve around lighting the menorah. On each of the holiday’s eight nights, another candle is added to the menorah after sundown. The ninth candle, called the shamash (“helper”), is used to light the others. Typically, blessings are recited and traditional Hanukkah foods such as potato pancakes (latkes) and jam-filled donuts (sufganiyot) are fried in oil. Other Hanukkah customs include playing with dreidels and exchanging gifts. Learn more about Hanukkah here.

Kwanzaa was created by Dr. Maulana Karenga in 1966 after the Watts riots in Los Angeles. He founded US, a cultural organization, and started to research African “first fruit” (harvest) celebrations. From there, he combined aspects of several different harvest celebrations to form the basis of Kwanzaa.

The name Kwanzaa comes from the phrase “matunda ya kwanza” which means “first fruits” in Swahili. Each family celebrates Kwanzaa in its own way, but celebrations often include songs and dances, African drums, storytelling, poetry reading, and a large traditional meal. On each of the seven nights, families gather and a child lights one of the candles on the Kinara, then one of the seven principles, values of African culture, is discussed. An African feast, called a Karamu, is held on December 31. Learn more about the principles of Kwanzaa here.

Boxing Day takes place on December 26. Only celebrated in a few countries, the holiday originated in the United Kingdom during the Middle Ages. It was the day when the alms box, collection boxes for the poor often kept in churches, were opened and their content distributed, a tradition that still happens in some areas. It was also the day servants were traditionally given the day off to celebrate Christmas with their families.

Boxing Day has now become a public holiday in the United Kingdom, Canada, Australia, and New Zealand, among other countries. In England, soccer matches and horse races often take place on Boxing Day. The Irish refer to the holiday as St. Stephen’s Day, and they have their own tradition called hunting the wren, in which boys fasten a fake wren to a pole and parade it through town. The Bahamas celebrate Boxing Day with a street parade and festival called Junkanoo. Learn more about the origins of Boxing Day here.

Ōmisoka, New Year’s Eve, is considered the second-most important day in Japanese tradition as it is the final day of the old year and the eve of New Year’s Day, the most important day of the year. Families gather on Ōmisoka for one last time in the old year to have a bowl of toshikoshi-soba or toshikoshi-udon, a tradition based on eating the long noodles to cross over from one year to the next.

At midnight, many visit shrines or temples for Hatsumōde. Shinto shrines prepare amazake to pass out to crowds and most Buddhist temples have large cast bells that are struck once for each of the 108 earthly desires believed to cause human suffering. Learn more about Ōmisoka here.

What other holidays do you celebrate in December?